33 of the Day: al-Baghdadi Killing

"The raid, as reported, took place at 3:30PM Washington time"

"According to this website which tracks Trump's golf outings. He left the club at 3:33pm. He was golfing at the time of the raid."

Trump Whines: My Murder Of A Terrorist Leader Is BIGGER Than Obama's

And of course he did: 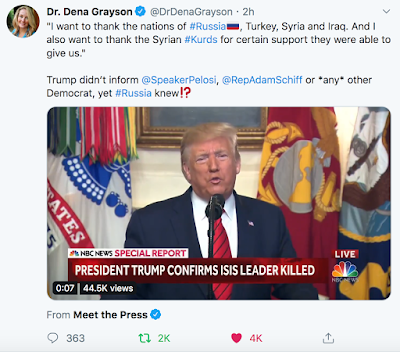 Yes, no reason to congratulate Trump either. 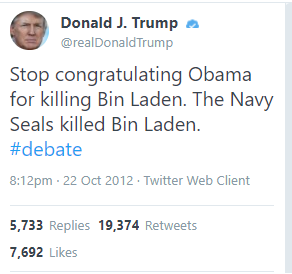 What does Trump have against dogs, anyway? 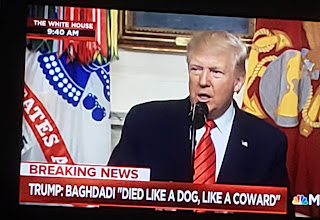 33 of the Day: Ukraine Edition

For the last 33 years, it has been my great honor to serve the American people as a Foreign Service Officer, over six Administrations—four Republican, and two Democratic. I have served in seven different countries, five of them hardship posts, and was appointed to serve as an ambassador three times—twice by a Republican President, and once by a Democrat. Throughout my career, I have stayed true to the oath that Foreign Service Officers take and observe every day: “that I will support and defend the Constitution of the United States against all enemies, foreign and domestic;” and “that I will bear true faith and allegiance to the same.” Like all foreign service officers with whom I have been privileged to serve, I have understood that oath as a commitment to serve on a strictly nonpartisan basis, to advance the foreign policy determined by the incumbent President, and to work at all times to strengthen our national security and promote our national interests.

She goes on to explain her history and work in Ukraine and how she was slimed by the Trump administration, the worst most corrupt and treasonous POTUS ever.

On the positive side, Trump does seem rightly screwed-- he's caught dead-to-rights for a corrupt quid-pro-quo deal for campaign dirt in exchange for US military assistance. Freaking INSANE.

The Art of Diplomacy, by Donald J. Trump

It's hard to believe this is real, it's so childish, but it is. And of course, Trump is a world class ignoramus and moron. 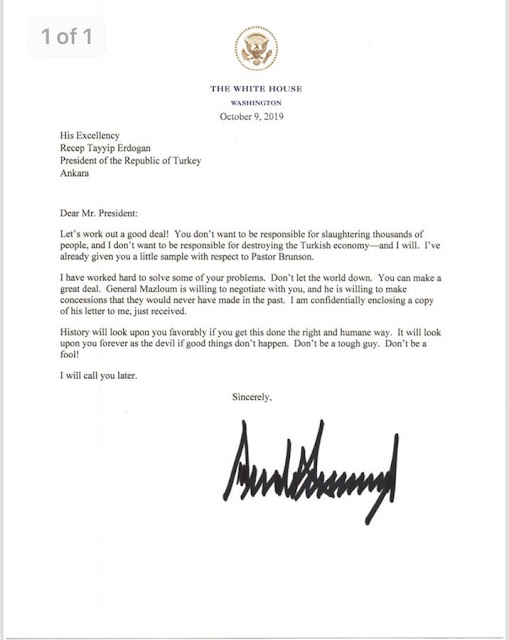 Also, Erdogan has 50 of our nuclear bombs in his country right now... so that's just great.

Fetzer Gets Nailed for His Sandy Hook Claims

I used to like old Fetzer, but he seemed to become less liberal and more of a crazed conservative over the years, and I think he really went around the bend when it came to Sandy Hook. That's when I stopped listening to his show anyway.

A jury in Wisconsin has awarded $450,000 to the father of a boy killed in the 2012 Sandy Hook school shooting after he filed a defamation lawsuit against conspiracy theorist writers who claimed the massacre never happened. A Dane County jury on Tuesday decided the amount James Fetzer must pay Leonard Pozner, whose 6-year-old son Noah was among the 26 victims at Sandy Hook Elementary School in Newtown, Connecticut, on Dec. 14, 2012.

Fetzer, a retired University of Minnesota Duluth professor now living in Wisconsin, and Mike Palacek co-wrote a book, "Nobody Died at Sandy Hook," in which they claimed the Sandy Hook shooting never took place but was instead an event staged by the federal government as part of an Obama administration effort to enact tighter gun restrictions. A judge earlier ruled Pozner was defamed by statements in the book that claimed he fabricated copies of his son's death certificate.

It is also the established policy of the United States that countries that wish to be in good favor with the U.S. should flatter the president obsequiously and, if possible, patronize one of his hotels or resorts.

It is also the official position of the POTUS and thus, by extension the U.S. government, that we support in whatever ways possible President Vladimir Putin and the Russian government and are committed to the weakening of the NATO Alliance and all multilateral institutions.

It is also established that the U.S. government rejects science and history and values relations with governments that serve the above policy objectives above secondary considerations like democracy or human rights.

This is not a joke. This is not an overstatement. This is our foreign policy today. It is at core nothing more than a marketing strategy for Donald Trump, the Trump Organization and his perceived personal interests. All his senior advisors and the GOP leadership have bought into this strategy and seek to advance it.

It is the greatest corruption of US foreign policy in our history & precisely what the Founders feared most. And every single day the facts outlined here are further corroborated.

It is all happening in plain sight & it is doing grave damage to the US and our interests worldwide. 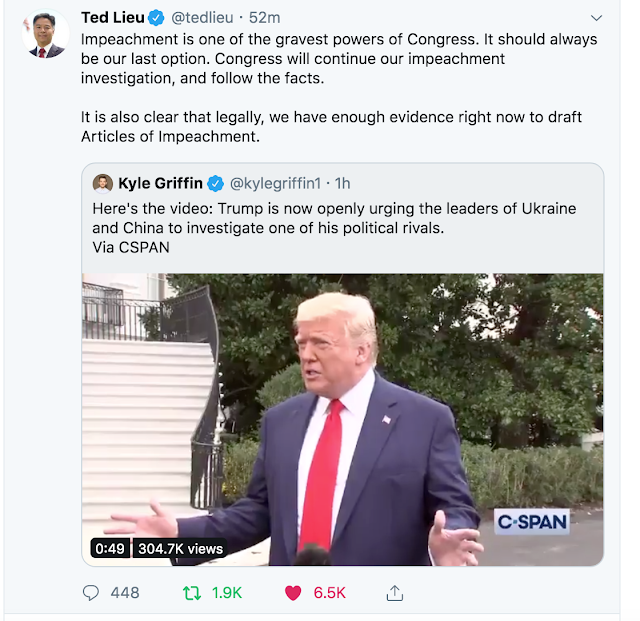 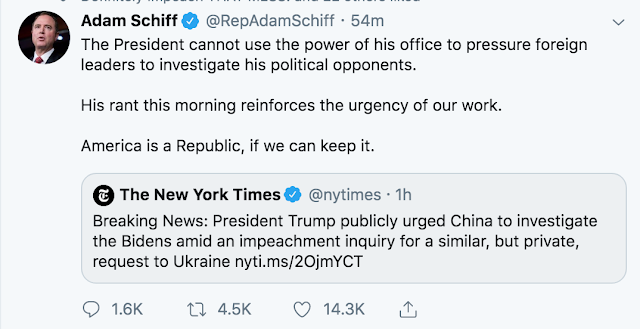 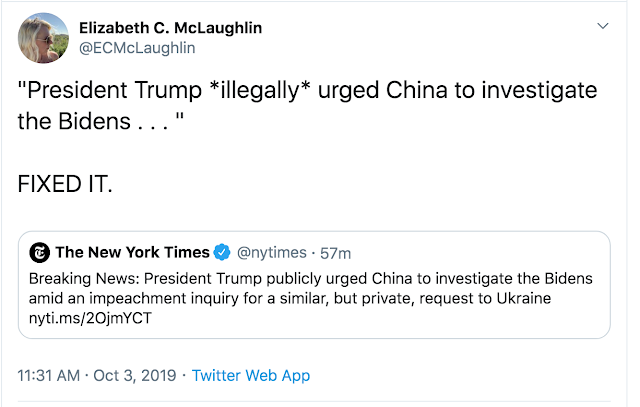 For the last time, this is all part of the plan. Getting himself impeached is actually a strategic triumph for President Trump, and anyone who thinks otherwise is just not playing chess in enough dimensions. Consider what is the greater mark of strategic genius: to mire yourself and your administration in an endless series of idiotic and pointless controversies, often rife with misspellings, damaging your standing at home and abroad, or to NOT do that? If you say the second, you are a fool.

This is all part of the plan. Actually, this is good. Actually, this is great. I repeat, every move that Trump makes, has made or is making, currently, with the president of Finland sitting helplessly by his side, wearing an expression of alarm, is planned. It is a genius plan. It might look like the random, haphazard flailing of a cat that has gotten its head stuck in a bucket. But actually he is in total control.

He is like a master baker, preparing everything just exactly the way he would like it. You can’t make a cake without breaking eggs! That is why he has broken all the eggs and will not stop breaking eggs until there are no eggs anymore. He is baking the chess pieces into a cake, and it is brilliant, and that is why no one has thought to do it before.

Natural News is selling them. 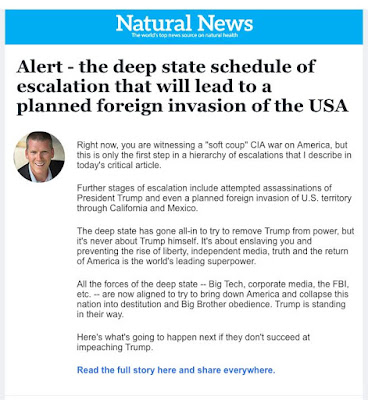 I mean seriously, who honestly believes Trump is draining the swamp and preventing a foreign invasion (as opposed to being a deranged narcissistic plutocrat in bed with Russia)?

Is Mike Adams laughing at his audience here?