33 of the Day: Whistleblower Complaint 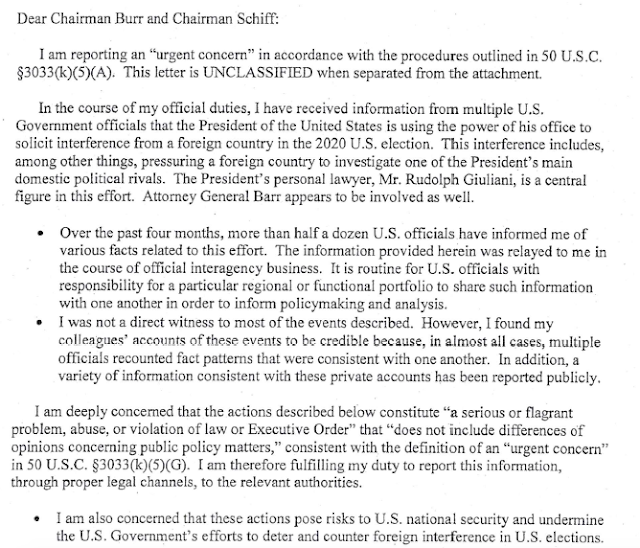 How Corrupt and Criminally Terrible Is Trump?

He actually got Nancy Pelosi to agree to impeachment.

That says a lot.

He really is one fucking corrupt piece of shit. We knew it before he was elected, but this latest thing with Ukraine just sealed his fate.

Explosives at the WTC... New Call for Investigation and a New WTC7 Study

For the first time ever, an elected body in the United States is stating that it is “beyond any doubt” that explosives – not plane impacts and fires alone – destroyed the three World Trade Center towers on Sept. 11, 2001.

Commissioners from the Franklin Square and Munson Fire District, located near Queens, New York, unanimously passed a historic resolution on July 24 that calls for a new investigation into all aspects of 9/11 and which cites “overwhelming evidence” that explosives were planted in all three towers prior to 9/11.

“It was a mass murder,” Commissioner Christopher Gioia said in an interview. “Three thousand people were murdered in cold blood.” Gioia, who wrote and introduced the resolution, says the toll on his department from the events of that day has been devastating. Members Thomas J. Hetzel and Robert Evans died at Ground Zero on 9/11. Others, including commissioners Philip Malloy and Joseph Torregrossa, have become ill from exposure to the toxic air during rescue and recovery operations.

“We’re not leaving our brothers behind,” Gioia said. “We’re not forgetting about them. They deserve justice, and we’re going to see that justice is done.”

Ever since a friend alerted him several years ago to the seemingly inexplicable collapse of Building 7, Gioia has poured his passion and time into researching the subject. He found that despite there being only small and isolated fires on just a few floors, the 47-storey building came down symmetrically, into its own footprint, in just under seven seconds on 9/11.

The official investigation into the collapse was conducted by the National Institute of Standards and Technology (NIST) — an agency under the U.S. Department of Commerce — which somehow concluded that normal office fires were responsible for the failure of the structure.

But the findings of independent 9/11 researchers working with Architects & Engineers for 9/11 Truth (AE911Truth) later forced NIST to admit that the building came down at free-fall for at least one-third of its seven-second fall. This is something that could only happen if all the supporting columns failed virtually simultaneously. Despite this admission, NIST sticks to its original conclusion.

The fire district resolution is not the only dramatic development on the 9/11 front in recent days and weeks. In March, a joint federal lawsuit was launched against the FBI by AE911Truth, the Lawyers’ Committee, and family members of 9/11 victims.

It contends that the agency has failed to perform a congressionally mandated assessment of 9/11 evidence known to it that was not considered by the 9/11 Commission.

And perhaps the most powerful step forward came on Sept. 3 with the long-awaited release of the ground-breaking Building 7 Study (A Structural Reevaluation of the Collapse of World Trade Center 7) by the University of Alaska Fairbanks (UAF).

The four-year study, conducted by Dr. Leroy Hulsey, Ph.D., and two other researchers, is a “finite element analysis” that uses computer modelling based on the original blueprints for the building. Its purpose is to determine whether the official explanation for Building 7’s destruction stands up. It doesn’t. The executive summary of the study states: “… fires could not have caused weakening or displacement of structural members capable of initiating any of the hypothetical local failures alleged to have triggered the total collapse of the building, nor could any local failures, even if they had occurred, have triggered a sequence of failures that would have resulted in the observed total collapse.”

The Hulsey study will be unveiled at events in Fairbanks, Alaska, and Berkeley, California, over the next few days. Comments on the draft study will be welcomed until the end of October, after which a final version will be released.

This is just the latest major move to spread the truth about 9/11 to a much wider public and to get justice for those who died both that day and in the subsequent wars that were launched using 9/11 as justification.

“I would say to anybody who believes in this country that it’s time to make a stand; you can’t let this go,” Gioia says. “Because if they’re going to murder 3,000 people, what are they going to do next?”


Another source on the resolution.

AE911truth article on the WTC7 report:


Today, we at Architects & Engineers for 9/11 Truth are pleased to partner with the University of Alaska Fairbanks (UAF) in releasing the draft report of a four-year computer modeling study of WTC 7’s collapse conducted by researchers in the university's Department of Civil and Environmental Engineering. The UAF WTC 7 report concludes that the collapse of WTC 7 on 9/11 was caused not by fire but rather by the near-simultaneous failure of every column in the building.


Pretty awesome people are still looking into this though whether any justice will be done seems unlikely at this point.

Maybe the 9/11 perps are hoping the scandals around the imploding Trump presidency will cloud over investigation into 9/11... I'm sure the Trump scandals will delay 9/11 justice for some more time.

"Governing by Crisis and Spectacle"

If there is a method to Trump's madness, it is this:


Governing by Crisis and Spectacle

The idea is to keep us looping in the present so we can't look ahead.

It's a tactic of reactionary politics.

In a liberal democracy, a leader looks for ways to improve the lives of the people.

A fascist (or reactionary, or would-be oligarch) does the opposite.

If a would-be oligarch tries to improve the lives of the people, others can rise up and challenge his position at the top.

OK, so if leaders don’t govern in the usual sense (devising policy to better the lives of the citizens) what do they do all day? They create crisis and spectacle!

“Rather than governing, the leader produces crisis and spectacle.” --Ivan Alexandrovich Ilyin

Who the heck is Illyin? He's the fascist philosopher whose ideas informed the tactics created by Putin. Trump imitates those tactics. (Trump is a natural at creating chaos and spectacle) Ilyin was a Russian nobleman who went into exile after the communist revolution.

An admirer of Hitler and Mussolini, he wrote guidelines for Russian leaders who would come to power after the fall of communism. (He died in 1954). Ilyin believed fascism would eventually replace both communism and democracy. He admired totalitarianism and hierarchy. The nation, for him, was like a body, the citizens the cells. Each remained in its place. Fascism = order. Democracy & communism = disorder & chaos.

Ilyin disliked the middle class, which always striving for social advancement. He believed this fractured society and created chaos. He thought the rulers at the top should rule, everyone else must remain in their place. He thus advocated oligarchy (a few people hold all the power).

The task of the oligarchs to maintain power. But you can’t tell the people THAT. So you tell them a good story. You tell them the oligarchs are “redeemers.” This is overlaps with reactionist politics, that pines to return to a (mythic) bygone era.

They earn loyalty by protecting the people from enemies, and by promising to return to a better, more orderly era. When an oligarch (or in the case of Trump, a would-be oligarch) goes to work each day, he can't spend his time doing what a leader like, say, Obama did.

He can't spend his time actually governing. So instead, he creates lots of crisis and spectacle.

All ideas in this thread from Yale Profs. @TimothyDSnyder and @jasonintrator

The tactic is extraordinarily effective because it creates what we can call the Outrage Dilemma.

If you don't react, you run the risk of normalizing the behavior.

On the other hand, outrage feeds the cycle, which goes like this: Trump does something outrageous. Everyone goes into a spin. His followers are thrilled to see Trump's critics in an outrage spin.

Each time Trump does something outrageous, he accomplishes 4 things: He keeps his base excited. He enrages his critics. He batters democratic institutions, and He fulfills his campaign promise, which was to protect his followers from their “enemies.”

Finally, and most important, he wears out his critics until we feel exhausted and helpless and inclined to give up. When enough people give up, democracy collapses.

My suggestion is to get involved with volunteer work.

The question is whether he does this knowingly on purpose or instinctually. Either way, it's deeply corrupt and anti-democratic and helps the evil oligarchs.