This blog explores politics from a liberal/left perspective but also deals heavily with conspiracy theories and various unusual topics. Although I started this blog to research 9/11, my most pressing issue of concern now is anthropogenic climate change.

If you have doubts about the science of climate change, this website is a very useful resource to get educated.


I'm happy to have people comment and contribute ideas here. I don't censor comments except in rare cases where there is abuse or private information. Google/Blogger does sometimes censor comments for reasons I don't understand and I have no control over. Lately, I am not able to even find comments that Google/Blogger has blocked. Sorry about that.

I post kind of irregularly in recent years but I try to keep this site active. Feel free to use the search engine on the side for older content. You can read about the history of this blog here.

I rarely ever check my email for this blog (see sidebar for my address). If you need to contact me, the best bet is to leave a comment. If you need to email me, let me know in a comment that you've emailed me.

Thank you for reading.

This crop circle was discovered August 13, 2001 at Milk Hill in Wiltshire, U.K. Composed of 409 circles, the formation was 900 feet in diameter, flowing over an undulating landscape that rendered it impossible to see from one side of the formation to the other! Information encoded into the design specifies the date of its creation and the lat/lon of its position! How could human beings have created this design without being discovered?

A "triskelion" formation-- 3 interlocked spirals, or 3 + 3 arms. The larger circles have 3 and 3 side circles. 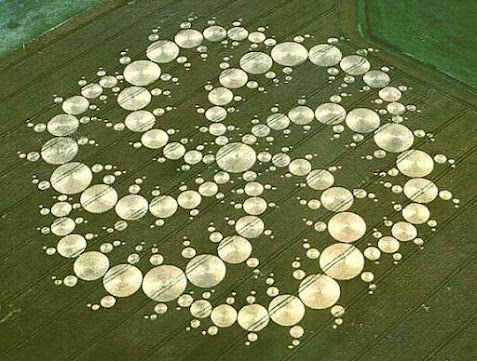 No way humans made this. The question is-- who did and why???

I recently listened to a couple podcasts on crop circles that were quite good. It was coincidental (or synchronistic) that they both came out in the same week though they had independent guests and are very different podcasts.

I first heard the Astonishing Legends podcast episode on crop circles. These guys are a little too slick for my tastes and do way too much introductory jibber jabber (I eventually skipped over about 15 minutes of them talking about what they were going to talk about), but eventually they did present a good overview on the topic.

Then I heard the Podcast UFO show on the same topic, with a great panel of guests. They had a really interesting discussion of the topic-- I highly recommend it. They didn't waste much time on filler unlike the Astonishing Legends podcast (and also no ads unlike A.L.).

Both podcasts are worth the time if you're interested in the topic, though I recommend skipping fast through the first part of the A.L. pod and of course skip over the ads.

Bottom line is the evidence is that most crop circles are probably a paranormal/ET-linked phenomenon. Most interestingly is the fact that they have gotten progressively more complex over the years, not unlike the topic of UFOs. There is a theory that it is ETs trying to send humanity a message, but still they are mostly a big mystery.

Did Eisenhower Meet with ETs?

Interesting discussion that touches on some old "ultimate truth" issues, though I'm sure A.P. would say their interpretation is disinfo or something like that.

Wow,  Laura Eisenhower has some wild stuff to say and it sounds a lot more like A.P.'s stuff.

1) the engine piece was found under a canopy, with no hole in the roof showing how it got there and it seems unlikely someone would have rolled this large piece of flaming hot evidence there
2) the starboard engine of the plane that hit the South tower collided with a floor slab and it seems very likely this would have kept the engine from sailing out the other side of the tower
3) the engine would have had to weave between several tall buildings to get to Church and Murray
4) the distance travelled by the eject is not clearly the right trajectory to land at Church and Murray
5) between the videos and the plane-shaped hole, it is clear that no conventional plane hit the tower
From here.

What happened on January 6 was a military operation. To the insurrectionists, the besieging of the Capitol was the storming of the Bastille—a revolutionary act. “Insurrection,” after all, is a violent uprising against an existing government. There was fighting that horrible day: hand-to-hand combat. Blood was drawn. People lost their lives.

The irony is that the insurrectionists did not need to ignite a new Civil War. The new Civil War was already upon us. It predated January 6. And it rages still. This is an information war, a narrative war, a war waged in the press and on cable news shows and across social media platforms. The battlefields are not Antietam, Gettysburg, and Bull Run, but Facebook, Twitter, and Clubhouse.

In this new Civil War, states do not secede from the Union; instead, citizens divorce from reality, inventing their own alternative universe, in which Donald John Trump, not Joe Biden, is the rightful President of the United States; in which Biden’s son, not Trump’s, is exploiting his father’s office for personal gain; in which MAGA Republicans, not Democrats, care about the rule of law and the wellbeing of the people. Biden stole the election! Trump will return to Washington to be sworn in again, in fulfillment of the Q Scripture! Then he can continue his clandestine operation of rooting out the pedo sex trafficking ring! Save the children!

If the battlefields are virtual and fuzzy, the battle lines are clear. On the opposing side is an entire political party that is full-tilt authoritarian—a Confederacy of Fascists. Gone is the GOP of Lincoln and Eisenhower and Reagan. What remains is a zombie party, which looks the same outwardly—we all recognize the pickled husks of Mitch McConnell and Lindsey Graham and Chuck Grassley—but is hellbent on the annihilation of democracy. This is no longer about right versus left, management versus labor, Medicare expansion versus tax cuts, “cancel culture” versus “woke.” This is a fight against tyranny, simple and plain. Everything else, everything else, is just noise.

Reality check: The Republican Party has no substantive platform. It has no policies beyond voter suppression, gerrymandering, and looting the Treasury for its billionaire whoremasters. It quashes dissent, it cheats, and it steals. And when legislation comes up that will actually help people, it obstructs. The Republican Senate under Mitch McConnell is a kidney stone, an aortal blockage, a banana in the tailpipe, that ship in the Suez Canal. It has been this way with Washington Republicans since Newt Gingrich was House Speaker.

Malfeasance is now standard operating procedure for the GOP. This is the reality. Patrick, the Texas lieutenant governor, went on TV a year ago and said that seniors should be willing to die for the economy. “There are more important things than living.” Ladies and gentlemen, the Republican Party!

All of these GOP clowns and their Republican-controlled statehouses have crafted a fresh batch of voter suppression laws, most notably the one signed into law last week by prick-faced election thief Brian Kemp. We all know the new Georgia law bars the handing out of water to voters waiting on line, but it also—this is important!—cedes power to the state legislature to overturn election results if the preferred candidate doesn’t win. That’s tyranny, in black and white. (That’s also what should have been the front-page headline, but of course it wasn’t.)

The scales of the federal government are inherently weighted in the GOP’s favor. Wyoming, North Dakota, and South Dakota, each with a population well below a million, each staunchly red, have two Senators each—same as true blue California, with its 40 million residents. What the Republicans will do, if these laws are allowed to stand, is craft new, even more repressive laws to ensure they stay in power indefinitely. They have made no secret of this. It’s happening right now, in Georgia and other statehouses across the country.

As a minority party, the GOP as currently constituted can only survive by minority rule; thus, it seeks to establish a Russia-style oligarchical system here. Joe Biden and the Democrats cannot compromise with a party that wants to shit-can democracy. We don’t negotiate with terrorists. The current GOP must be destroyed, laid to waste, so that a new conservative party, one that doesn’t oppose universal suffrage, one that doesn’t want to kill us all, can take its place. Which means a stake must be driven through the heart of the filibuster. End forever that noxious vestige of whitewashed racism.

We have less than two years to put safeguards in place to ensure the survival of our democracy. There is no time to waste.

Not that the media has any fucking clue of the stakes, or even the battle. These Beltway fops only care about presidential press conferences and their own book deals. Just as the press is only now figuring out that, oh yeah, oops, Donald Trump did have ties to Russia and organized crime, and what do you know, he was a thief and a con man, so the MSM is still covering the two parties like it’s 1964. How many articles have there been criticizing Biden for not being “bipartisan?” As Eric Boehlert has pointed out, 70+ percent of Americans favored the $1.9 trillion relief bill. That’s as “bipartisan” as it gets. It’s the Republicans in Congress who are out of touch. But the buffoonish Beltway press paints a completely different, and counterfactual, picture.

It is up to us, I’m afraid, to fight this new Civil War, this battle of narratives. We must disseminate the truth we insist on, and ensure that a government of the people, by the people, and for the people does not perish from this earth.

For the 20th anniversary, I will try to do a review of how things stand with the 9/11 conspiracy-- any new ideas, findings, changes in my conclusions.

The Awesome Power of Rightwing Propaganda

Nothing shows the awesome power of right-wing propaganda and brainwashing better than the Trump presidency.

By ANY objective measure, Trump was a historically terrible president:

-- committed countless crimes while in office

-- made countless lies as president

-- seditious: he fomented an insurrection against Congress

-- treasonous: he openly praised American enemies and accepted foreign help in his election

-- horribly mishandled a pandemic leading to the deaths of 100s of thousands of Americans. He actively  killed US citizens!!!

Normal people think-- WHY THE FUCK ISN'T HE IN JAIL for all this????

Republicans actively deny he did ANYTHING wrong and still say he was the greatest president.

It's like you simply could not find a starker difference between reality and delusion accepted by millions of people.

Now HOW the fuck do we get around this???

These people are literally ruining the country.