By The Anonymous Physicist

I recently saw the episode “Hotel Collapse Singapore” of the National Geographic Channel (NGC) series, “Seconds from Disaster.” It was first aired on September 27, 2005. The Wikipedia article on this matter is here.

Singapore’s six-story Hotel New World was actually known as the Lian Yak building, and was built in 1971. Curiously, it has a strange history. Eleven years before the 1986 collapse, this building had a poisonous gas leak and made the headlines in August, 1975. Its total collapse took place on March 15, 1986. Yes, this is the Ides of March, infamous since the days of the Julius Caesar assassination.

The above NGC show stated that the six-story building took about 60 seconds to collapse. The photos of the immediate aftermath showed what looks like a 3-4 story rubble pile, with massive parts of the building intact. E.g.-- 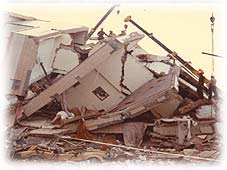 The show did not contain any videos of the collapse, so I assume there are none. Contrast this with the WTC towers’ “collapses.” The towers were 110 stories high, yet “collapsed” in about 12 seconds, with estimates ranging from 10-15 seconds. The WTC “collapses” “disobeyed” entropy, and were nearly uniform around their circumferences, which clearly is not the case in the New World Hotel collapse, as evidenced by its very non-uniform, and massive, rubble pile. Most telling is the height of the Lian Yak rubble pile. It appears to be about half the height (or more) of its original structure. Contrast this with the rubble piles of the WTC towers’ “collapses”, which are about the same height as the small Lian Yak building’s rubble pile, despite the fact that the towers were nearly 20 times the height of that building! This, of course, is one of the best evidentiary items that the WTC destruction involved nuclear bombs that vaporized most of the inside contents of the towers, as depicted here. Large items and numerous people [see below] were left intact in the Hotel New World rubble pile. But, in contradistinction, virtually no furniture, and over 1400 people left no body parts nor a strand of DNA was found from them in the WTC rubble pile-- they were vaporized.

Wiki details the possibly strange, changing expectations of the number of dead in the aftermath of the Lian Yak collapse: “Immediately after the collapse, as many as 300 were feared trapped underneath the debris. Estimates dropped to 100 trapped or missing a day later, and then to 60, including 26 hotel staff and 16 bank staff unaccounted for. The figure was finally put at 50 when the official death toll was announced on 22 March 1986 after the end of the rescue effort.” Note that, unlike the WTC disaster -- whereby many people escaped because there was an hour between “plane hits” and tower destruction -- there is no indication of people fleeing the Lian Yak building before collapse.

The final official numbers are that 33 people died. And 17 were rescued in the hours and days following the 3/15/86 collapse. This is a 34% survival rate. This is vastly greater than the rubble pile survival rate of the WTC (0.7%), whereby 20 people were dug out of the rubble pile, and the death toll “officially” is 2751. A much smaller survival rate is perhaps expected from the different scales involved, but there is no word on the Singapore collapse having any completely missing, or vaporized, people, or furniture, etc.

The Singapore Gov’t supposedly undertook an extensive search for the cause of the collapse. Officially, they ruled out many things, but their final finding is quite remarkable. Now in determining the safety of a building, structural engineers calculate what are known as “dead load” and “live load.” Dead load refers to the building without any inner contents, or added on entities to the roof or sides. The live load includes people, furniture, and anything else added inside, or on top, or on the sides, after the building is first finished being built. The Govt’s finding declared that the engineer(s) who calculated the ability of the weight bearing structures to bear loads, completely left out the dead load in their calculations, and used only the expected live load. And the live load is usually a fraction of the dead load!? It is hard to believe that this most basic calculation was not performed. Furthermore the question arises to this researcher (but was not cited in the TV show), why then didn’t the building collapse immediately after, or even before, it was finished, if it was made to support only a fraction of its dead load?

So I must ask, is the official death toll of 33 mere happenstance, or a giveaway that this collapse was planned, perhaps even before it was built? I note that I have seen none other than Z.P. Bazant refer to this New World Hotel collapse in his attempts to declare the WTC towers’ destructions as gravitational, progressive collapses. Exposing the lies of Z.P. Bazant can be found at this blog. And I have revealed here that the use of the number 33 is often a signal employed by the PTB to either demonstrate that they were in control of an event, and/or that it was a nuclear matter. See Spooked’s 33 blog here. (The Lian Yak collapse does not contain any indications of a nuclear matter.)

In the final analysis, the official death toll of 33 in the New World Hotel may signal conspiracy and malice aforethought; perhaps far in advance and possibly even for the purpose of trying to explain the future destruction of the WTC! (And the World Trade Center certainly is in the “New World.”) I have detailed that the PTB often do things far in advance of when a matter becomes clear to the rest of humanity -- if it ever does. See http://www.anonymous-physicist.blogspot.com/ Or there may merely be numerous coincidences in this matter.

But no matter what else may (or may not) be involved, the collapse time, rubble pile height, its randomness, its large remaining inner content parts, the rubble pile survivor numbers, and other data, all show that when a building does collapse -- and it does not involve nuclear explosions -- entropy rules, and there is no great missing mass, nor vaporized people or furniture. The contrast of the Singapore New World Hotel collapse, with the WTC nuclear destruction is crystal clear.