Almost 3 weeks after the election, Trump is claiming he won, even though he lost badly both by popular vote and the electoral college. He's claiming massive got fraud, and of course his legal team is a world-class joke. The stupidest and kookiest people you can imagine: Rudy Giuliani, Sidney Powell, Jenna Ellis.
But IMO, the GOP tried to rig the election. Trump's numbers are inflated. No way so many millions of people want 4 more years of covid and poverty. They tried to push up his numbers but they just didn't inflate them enough. That's why they're so angry.
The paper mail-in ballots couldn't be rigged, which is what saved us. Also massive turnout.
Of course now the motherfuckers are gaslighting us into thinking it was rigged for the Dems. This is how Trump's propaganda works. Accuse the other side of your own crime.
Here's a long twitter thread on the history GOP electronic vote rigging from the Jennifer Cohn, election fraud specialist:
https://threadreaderapp.com/thread/1297286962819153920.html

I documented so much weirdness over the years.

Jeff Hill was the guy who managed to get so many incredible phone interviews with dozens of 9/11 witnesses.

-- This UA175 puffball discrepancy with his footage still is great proof of composited video.

Eventually Jeff Hill and others shifted away from the no-plane theory.

So many times in the last few days, since Joe Biden and Kamala Harris were declared the winners of the presidential race, I've heard someone say that it's fine to be happy, but "we have to grapple with the fact that 70 million still voted for Donald Trump despite everything that we know about him. What are we going to do about that?"

My response is simple: Maybe we just need to accept that at least 70 million Americans are just shitty people. And, frankly, it's on them to change. They're not fucking children. They're adults who made adult decisions. I'm so fucking sick of the infantilization of the Trump voter, the idea that they're these naifs who need to be nurtured into some kind of maturity, that they have fears of the progressive world (even as they benefit from it in many places with expanded Medicaid), that they are uneducated and inundated with bullshit from Fox "news" and its devolved progeny in the nutzoid right-wing media.

Fuck that. They chose this ideology. They chose what to believe. They decided to be a bunch of scabby pricks. They gotta own that shit. Forgiveness is wasted on those who refuse to believe they need to be forgiven. The more charitable of you might be able to do it, but I'm not fuckin' charitable to these goons and freaks and worms. Donald Trump played 'em like a goddamn fiddle. Hell, he's still playin' them, squeezing them for more cash under the umbrella of his bullshit "voter fraud" lawsuits. Until they wake the fuck up or are woken the fuck up, they need to exist as a warning not to let them get more power than they have and to work like hell to take away their remaining power.

It's time to tell Trump voters to spend a little time trying to understand Biden voters so they can see why we fucking kicked Trump's ass.

33 of the Day: Joe Biden Wins the Presidency 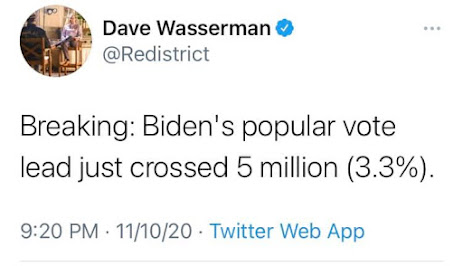 Ultimately, the election isn't even close.

Biden will have won with the biggest vote total and 2nd biggest vote margin in history. Kamala Harris makes history as the first female VP, first woman of color as VP.

Some various pieces for posterity:

Of course the world's biggest douchebag, Donald John Trump, is acting like a spoiled child and not conceding, like most people predicted.

So Trump: -- lost the popular vote massively both times -- only won in 2016 by flipping normally Dem states by barest of margins -- never cracked 50% in approval poll average as POTUS -- was IMPEACHED -- had an absolutely disastrous 1st term: net job loss, 230,000 COVID dead...

-- 2020 lost with those same Dem states flipping back to Dem

But yeah, sure tell me how he only lost by vote fraud.

Despite the great power and amazing insights and opportunities that the US presidency offers, Donald J. Trump will leave office the same exact stupid, deeply dishonest, horribly corrupt, extremely narcissistic asshole as when he entered office. Good riddance to bad rubbish.