Listen to this NPR segment, where Shostak makes the dumbest old cliched anti-ET UFO arguments (6 min in) -- just such a ridiculous joke of a cover-up of a real phenomenon.

Of course, Shostak works for SETI, an ET-denying joke of an organization. What a piece of shit.

Letter to the Editor Re: Flag Etiquette

As the mother of two Eagle Scouts, I am fussy about flag etiquette. Here are some do's and don'ts for our flag.

1. Do not place any other flag more prominently than the American flag. No politician or cause supersedes the United States flag.

2. Never bastardize the flag for your political beliefs like changing the colors. It is not gray with a blue, red or any other color stripe. It is red, white and blue.

3. Do not display the flag with the Stars and Bars. The Virginia Confederate flag is about the destruction of the United States. That is its history.

4. Never use the flagpole of the US flag to try to beat a capital police officer to death while chanting "Shoot him with his own gun."

5. Never cut the American flag down off of the Capitol and throw it to the ground as insurrectionists cheer.

6. Never try to replace the US Capitol's flag with a Trump flag.

What happened on Jan. 6 was the culmination of an anti-democratic, anti-American movement that has been building in our area for a while. It was not liberals in Trump hats that disgraced our flag. It was people who believe that only they should have a vote, and with Trump's lies and hateful words ringing in their ears, they were willing to spill blood to make Trump king.

Any politician or person that does not condemn that day is not an American let alone an American patriot.
SOURCE

Epstein Had Kompromat on Trump

According to Craig Unger, author of the new book "American Kompromat", Jeffrey Epstein definitely had kompromat on Trump-- at one point he was passing around a picture of Trump with two very young, half-naked girls, and a stain on his trousers... Of course Epstein's whole business was blackmail over kompromat he obtained with his guests and young girls.
Apparently much of Epstein's material ended up in Russian hands. Of course. Helping Putin gain control over Trump.
American Kompromat: How the KGB Cultivated Donald Trump, and Related Tales of Sex, Greed, Power, and Treachery

Republicans Give a Bad Name to Conspiracy Theories

The case of Marjorie Taylor Greene--

basically she seems to believe in every numbskull, racist and anti-Semitic conservative conspiracy theory but also thinks the government did 9/11.

A month later, in December 2018, Greene spoke at an American Priority conference alongside Ali Alexander (who would go on to find fame as the organizer of the Jan. 6 protests that led to the Capitol riots), failed right-wing agitator Milo Yiannopolous, and Laura Loomer, the far-right personality who lost her bid to join Greene in Congress last November, despite Trump’s support. At the conference, Greene suggested the Sept. 11 attacks were part of a government conspiracy. “We had witnessed 9/11, the terrorist attack in New York and the plane that crashed in Pennsylvania, and the so-called plane that crashed into the Pentagon. It's odd there's never any evidence shown for a plane in the Pentagon.”

So her understanding of 9/11 is weak at best, and I imagine she just promotes every stupid conspiracy theory she hears, like these:

In May 2018, Greene signaled she was on board with even the most extreme parts of the QAnon world, when she liked a Facebook comment that promoted the Frazzledrip conspiracy. Frazzledrip is a baseless claim that Hillary Clinton tortured a young girl on video, cutting off her skin and wearing it as a mask, before drinking her blood in a Satanic ritual. It is also claimed Clinton killed NYPD officers who saw the video and covered up their deaths as suicides.

Space lasers — On Nov. 17, 2018, Greene wrote on Facebook — in a post that has now been deleted — about the Camp Fire, California’s deadliest and most destructive wildfire that “burned a total of 153,336 acres, destroying 18,804 structures and resulting in 85 civilian fatalities and several firefighter injuries,” according to the California Department of Forestry and Fire Protection. The department “determined that the Camp Fire was caused by electrical transmission lines owned and operated by Pacific Gas and Electricity (PG&E) located in the Pulga area.” But not according to Greene. In her Facebook post, she speculated that “because there are too many coincidences to ignore” it suggested that that then-California Gov. Jerry Brown (D) wanted to build a high-speed rail project and “oddly there are all these people who have said they saw what looked like lasers or blue beams of light causing the fires.” She also speculated that a vice chairman at “Rothschild Inc, international investment banking firm” was somehow involved, and suggested the fire was caused by a beam from “space solar generators.”

I've said it before, types of people like Greene are promoted by the media to make all conspiracy theories look stupid. Another reason Republicans are sick assholes. 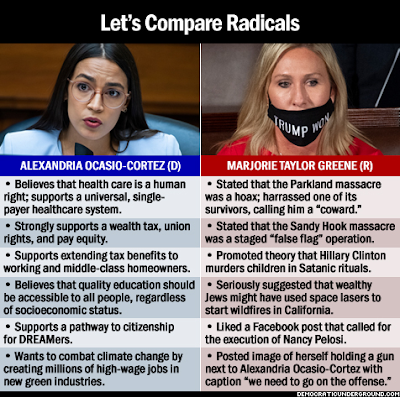