That is, the little isolated jets of debris shooting out the side of the WTC ahead of the collapsing portion: 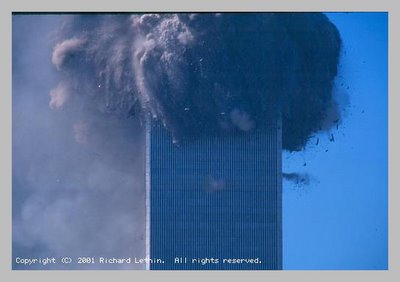 Multiple squibs were seen to accompany the collapses of both the south and north WTC towers.

A researcher named Aidan Monaghan has made some important points about the squibs:

Several theories have been advanced in order to explain the presence (of) these "squibs", including:

- Theory A: That collapsing or "pancaking" floors of each tower were responsible for creating these "squibs".

- Theory B: That collapse debris was compressed down elevator shafts by each tower collapse's demolition wave and that some of this debris escaped these elevator shafts at various points and burst through various upper floor windows, in the form of "squibs".

- Theory C: That these "squibs" were evidence of preset explosive devices that were used to deliberately collapse each tower.

Given that a nearly simultaneous, internal collapse or "pancaking" of floors would likely create more visibly significant and widespread damage to each towers structure beyond the small and isolated "squibs" that were evident at certain locations (and that were often well below each visible demolition wave), it seems that Theory A can not realistically account for these "squibs".

Indeed, what could be the most remarkable detail that refutes Theory B is that certain "squibs" were present at lower floors well before even outer free fallingdebris descending to the ground was, during at least WTC 2's collapse.

Theory B would therefore imply that likely massive amounts of collapse debris was descending down WTC 2's narrow elevator shafts at a faster rate than free fall speed, in order for the afore mentioned "squibs" to be present at lower floors, well before free falling debris outside of the collapsing building was. This would seem to be a very unlikely outcome.

In addition, these "squibs" were often white in color, very unlike the grey and black colors of the pulverized concrete and smoke that the observed demolition waves were comprised of. For Theory B to be correct, one would expect dark grey or even black colored debris bursts or "squibs", not white.

Based on the seeming unreliability of Theories A and B as explanations for the afore mentioned "squib" phenomena, Theory C (the use of preset explosive devices) ought to be subject to greater consideration and scrutiny, regardless of it's implications.

He has more pictures that illustrate his points.

I think the squibs are strongly indicative of explosive demolition, and importantly, similar squibs are seen with known cases of controlled demolition.

"What was the most exciting thing you saw?" I ask.

"I found a list of officers' names," he claims, "under the heading 'Non-Terrestrial Officers'."

"Yeah, I looked it up," says Gary, "and it's nowhere. It doesn't mean little green men. What I think it means is not earth-based. I found a list of 'fleet-to-fleet transfers', and a list of ship names. I looked them up. They weren't US navy ships. What I saw made me believe they have some kind of spaceship, off-planet."

"The Americans have a secret spaceship?" I ask.

"That's what this trickle of evidence has led me to believe."

"Some kind of other Mir that nobody knows about?"

"These acts involve the director of the National Security Agency, the deputy chiefs of staff for air and space operations and the U.S. secretary of defense," he said.

Tice sent a letter Dec. 16 to the chairmen of the Senate and House intelligence committees saying he wants to report suspected illegal activity. "These acts involve the director of the National Security Agency, the deputy chiefs of staff for air and space operations and the U.S. secretary of defense," he said.

The letter was sent the same day The New York Times reported that President Bush secretly authorized the NSA to eavesdrop on U.S. citizens without a court order.

Tice said he did not work on the program referenced in the Times article, but that his allegations are equally explosive.

"That was Hiroshima and this is Nagasaki," he said. "I want to talk about Nagasaki, which nobody's heard about yet."

Got it? Tice wants to testify about some totally different program than the NSA wiretapping issue.

The linked article above goes on to describe how Tice may be restricted to testifying only to the "Big 8", the chair and ranking member of the 4 Senate and 4 House committees which oversee SAP's (see my article on that, here).

Let's connect the dots. Risen and the NYT blow the lid off the NSA eavesdropping program in December 2005. Tice, who was fired 7 months earlier, suddenly appears in public and "confirms" the NSA story even though he didn't work on the program. And now he wants to testify about something completely different."

The guy worked in the intelligence community for 19 years. In 2001, he became suspicious of someone in the DIA and nothing was ever done about it. He fired off an angry letter heavily criticizing the FBI. He then lost his security clearance...