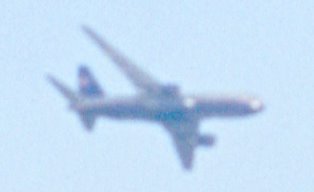 Flight Simulator can match this plane fairly well (using a Boeing 767-200 in United Airlines livery), in contrast to other images of UA175: 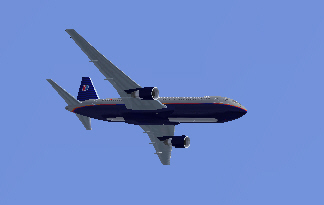 Although the body and wings line up well, the tail STILL doesn't line quite right, as I have noted for other UA175 images. The tail is quite close in the Clark photo, but one can see it is not right if you look carefully. The port tail fin (horizontal stabilizer) is swept back at too much of an angle, and is too triangular looking. Most notably, the vertical stabilizer looks tilted too much to starboard and may be swept back at too far of an angle as well. It should also be noted that the starboard wing in the photo is too tapered at the end-- it is the same thickness as the The starboard horizontal stabilizer (note the port wing looks normal) .


Here is UA175 extracted from the famous "Ghostplane" or "CNN Best Angle" footage: 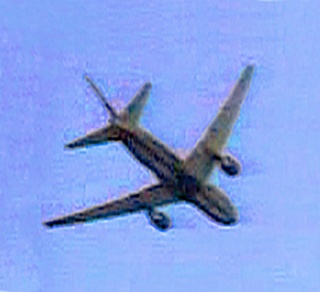 Here is a "match" with Flight Simulator (using a Boeing 767-200 in United Airlines livery): 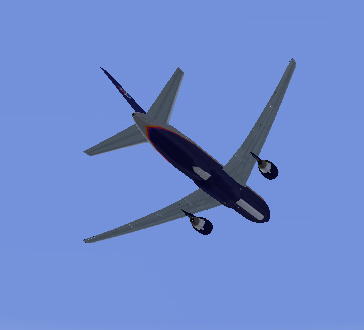 The big problem here again is the tail section. The tail horizontal stabilizers are smallish, abnormally thin and triangular (as opposed to a quadrilateral appearance). The vertical stabilizer lacks any depth and is merely a thin line. The horizontal stabilizer also appears to be at an improper angle, tilted abnormally to starboard. The other main problems with the Ghostplane UA175 image are: 1) the strange piping down the center of the fuselage that does not match the UA paint scheme, and 2) the dark bulge under the starboard wing root. Overall, this image of UA175 has a remarkably "cartoonish" look to it, and is undoubtedly some flawed computer animation of what is supposed to be a Boeing 767-200.

Note: in case you don't trust Flight Simulator's rendering of a 767-200, I can tell you that the 767-200 airframe of Flight Simulator is indentical in these simulations to what I get with a physical 1:200 scale model of a Boeing 767-200 (obtained from a hobby store).

Can you please put a link to my site 911exposed.org [Large 911 Pentagon site]

Ever done much photography? It's not at all uncommon for subtle shifts of angle to cause apparent distortion ("apparent" meaning "to the viewer's eye") in an image, especially in a moving object through seemingly clear atmosphere. Photos are often not as precisely accurate as many people think for a great many reasons. The subtle angle of the tail fin you point out is such a minute detail that it could easily result from this type of phenomenon. Hardly proof of some grand paranoid conspiracy.

Though it's a cartoonish image, it looks like a real if you're not an expert. Computer age really make anything.

I saw so much worthwhile material here!