In this post, I pointed out that the plane we all saw hit WTC2 "live" on TV wasn't a true 767-200-- it has a much stubbier nose than a bona fide 767-200. This stubbier nose makes the starboard engine protrude more obviously (compares diagonal purple lines at the front of the plane): 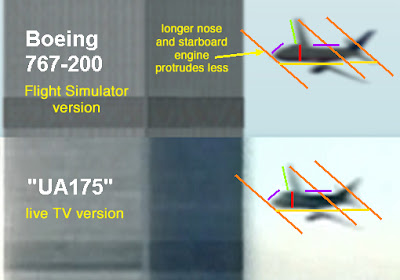 One possible explanation I gave for the stubby nose and the starboard (rear) engine protruding more frontward in the "live UA175" is that the plane in the video is actually pointing at a slightly different angle, more towards the camera, such that we are seeing a slightly more frontal view of the plane. This would bring the starboard engine out more and explain the overall foreshortening of the fuselage. However, this still presents a problem with the "live UA175" since this rotation of the plane more frontwards completely throws the angles of the wings off from what we see in this "live" image.

One argument AGAINST this rotation explanation is that if you look at the smaller yellow line, which corresponds to the length of the fuselage from the wings to the tail, it is exactly the same between the flight sim CGI model (top) and the video (CGI model; bottom) plane.

This indicates there actually is not much foreshortening going on at least in the rear part of the plane, and thus argues against the overall foreshortening explanation for the difference in the plane's appearance.

Basically, what we were shown live on TV was a FREAK PLANE.

so. either this image of ua175 that FOX(?) presented us with was some kind of mutant 767 or it was merely a hastily done image of a 767 inserted into their helicopter-mounted wescam system's image of the wtc.

the odds that the real ua175 would be anything other than a normal 767 are mighty slim indeed.

This comment has been removed by a blog administrator.

Hey numnutz.... if the planes were really fake, wouldn't they look exactly like the ones in the video game?


All you've proven is that the "real" images look different from your own frakking fakes.

in reality spooked has proven that he will not stop until he figures it all out.

you (sword of hitler) on the other hand have proven time after time that you know nothing about 9/11.

what is your function here sword?

of all of the bogus images of ua175 that one has got to be the stupidest.

i'm sure that there really are morons out there who find it comforting to accept even the slightest half-assed attempt at providing somethin to cling to, no matter how foolish.

Fred E. Culick, professor of aeronautics at the California Institute of Technology, has confirmed that the picture is indeed of a Boeing 767.

Oh bloody hell, that link you provided goes to another page where yet another half-wit argues that video games are exactly like real life.

Just how stupid are you?

For you "Impossible, but Plausible" nitwits:

Sword of truth is an idiot. there's a whole website to make fun of him and the rest of his gang of trolls

conspiracy smasher is laughing at you Pinch

again with the video games sword?
as i said, that has got to be the most foolish of all the images of ua175.
does anyone else here concur?
what is your function here sword?

look at the moving bridge!
this is from the naudet film.
was the bridge simply terrified and was fleeing for it's life?

for that matter did wtc7 simply die of a broken heart from grief due to the loss of it's 2 older and taller companions?

You are so stupid it hurts.

Read the comments on the moving bridge video you linked to, you @#$%ing moron.

ya right sort of truth!

here is another version of the very same freak plane from a different angle:
link
of course it should be considered to be a video game and hence serves as nothing more than a distraction from the video game-like qualities of the "live" FOX version and the even more ridiculous CNN version.