Has the Standard Operating Procedure for the China Syndrome Aftermath at the WTC been Completely Revealed?

by The Anonymous Physicist

Look closely at the left of this photo. 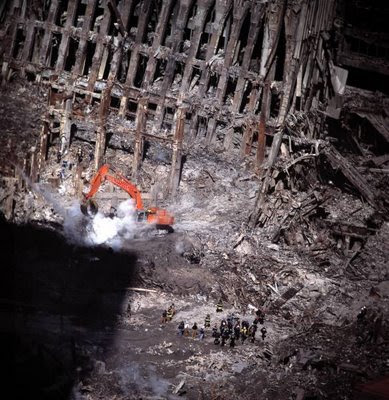 See that water is being sprayed-- from a spot fairly distant-- to the area near the large crane. And see that white steam is coming off the rubble, as a result of the hosing. (Note also that a great deal of debris has been cleared from around the core columns, meaning that this hot spot is still there several weeks into the clean-up process-- Spooked.)

Furthermore here is a photo apparently of a truck (near a large crane) being hosed down again from a large distance: 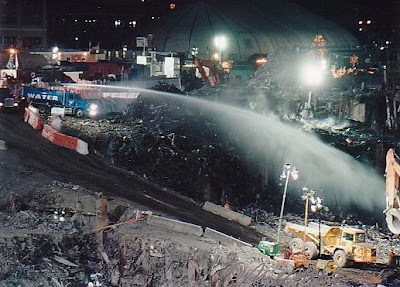 Note that the hosing truck says “water” not “molecular dissociating clouds.” Note also that no people are visible in this photo. Avoiding unnecessary radiation exposure? This further supports my China Syndrome Aftermath hypothesis, as follows. If the debris picked up by the crane, were just hot in the temperature sense, hosing it down IN PLACE after a while would have sufficed to cool it down, AND THAT WOULD BE THE END OF IT.

BUT if these were radioactive Uranium fragments with a half-life of 700 million years (from the left over fissile material of the nukes used [per my articles]), then these fragments indeed require further radiation-lowering treatment even when on the truck. Here is another photo whereby it seems that they automated the process of hosing down the contents of these trucks before they carried away rubble from the WTC: 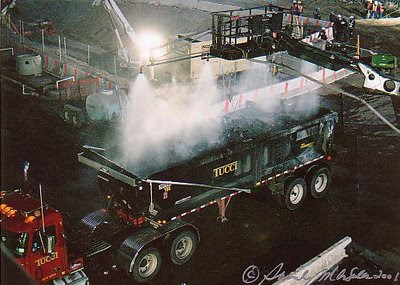 So I must ask:

Was this the S.O.P. [Standard Operating Procedure] for the China Syndrome Aftermath, at the WTC?

B. Then look and listen to the steam and hissing to pinpoint the “hot spot(s)”,

C. Then use the crane to lift up the “hot” [both in temperature and radioactivity] fragments--like here: 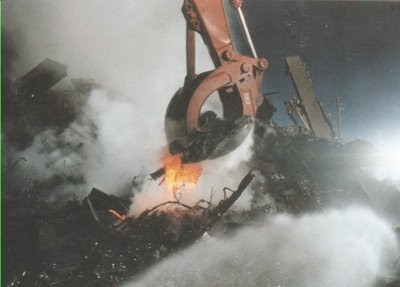 D. Then, call the Mafia/intel truckers, and get the crane to emplace the debris in the truck.

E. Hose down the truck’s contents, as the “material” per force, is still hot-- and I do mean radioactivity, as well as temperature. Again if it were only a matter of temperature, they would not have risked damaging the trucks, and would have hosed/cooled the rubble before putting it in the trucks! But this is not possible for long half-life, radioactive fragments, so the trucks had to be hosed down AFTER emplacing the rubble! They perhaps then took repeated radiation readings until a desired level was reached, before truck departure.

F. Finally ship it to China?


And subsequently, follow all this up with intel agency created, ludicrous, evidence-free hangouts to variously claim that 1. There was no heat there, or 2. The ground is merely “fuming” from a ludicrous, new physical mechanism, and BTW ignore the water hosing down aspect-- “it’s just a coincidence” or 3. Yes the grounds were very hot, but it was because of a new physical mechanism-- “super nano-thermite burns forever.” And BTW, ignore the fact that thermite cools off in minutes. The Jones article explained exactly how nano-thermite burns forever--“Somehow.” See here.

Those three “mechanisms” are of course, the intel-created hangouts of O.C.T., DEW, and Thermite. All to hide the CSA--the China Syndrome Aftermath, of the nuking of the WTC. As detailed here and here. Please help the world, and post this crucial article on all possible web sites! It is not likely to be allowed on 911 [anti-]truth blogs or forums, because they are virtually all intel-run.

wow dude not only are you very knowledgeable but you are very observant as well!
kudos.

Where I come from, it's bad manners to brag on yourself.

does nickname believe that i am the anonymous physicist?
no, i simply admire A.P.'s powers of observation.

"does nickname believe that i am the anonymous physicist?"

In constantly using the same lame, stale BS, you, ap, are like the fisherman's wife in Minnesota, whose drowned husband was brought home with his body full of eels.

Said she when she was asked, "What was to be done with him? 'Take out
the eels and set him again.'"

"Somali pirates suffered skin burns, lost hair and fell gravely ill "within days" of boarding the MV Iran Diyanat. Some of them died.":