Low Yield Mini- or Micro-Nukes That May have Been Used By The American Regime in The WTC on 9/11, & Note The 33’s 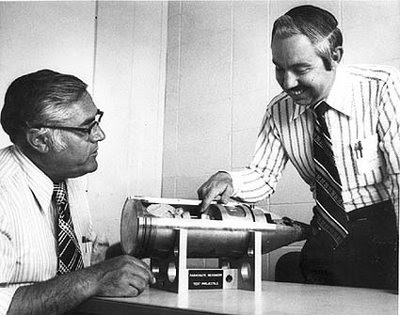 by The Anonymous Physicist

In the debate of how small nuclear bombs could have destroyed the WTC, some (likely intel shills) post that “if nukes were used, Manhattan would have been vaporized.” We shall see that the U.S. regime has admitted to plenty of very small nukes that wouldn’t have done that— but could have “done” the WTC.

The above photo of the W48 nuclear artillery shell is telling. Wikipedia states, http://en.wikipedia.org/wiki/W48 “The W48 was an American nuclear artillery shell, fired from a standard 6.1 inch howitzer. It was manufactured starting in 1963, and all units were retired in 1992. The W48 was 6.1 inches in diameter and 33.3 inches long. It came in two models, Mod 0 (135 were officially produced) and Mod 1 (925 were officially produced), which are reported to have weighed 118 and 128 pounds respectively. It had an explosive yield equivalent to 72 tons of TNT (0.072 kiloton), which is very small for a nuclear weapon.” This shell fit into the military’s regular 155 mm. howitzer.

Note that this yield is about 300 times smaller than the Hiroshima blast. And, of course, the small nukes used in the WTC were emplaced in the center. Note how small this artillery shell’s diameter is, and note its 33.3 inch length. An emplaced nuke with just the “gadget” itself would not need the outer shell, and would be even smaller.

Now let’s look a the U.S. Navy and Marines project called Special Atomic Demolition Munition, which was to be used for demolishing “enemy structures.” http://www.economicexpert.com/a/Special:Atomic:Demolition:Munition.htm

“The main [nuclear “device”] was the Mk-54, a cylinder 40 by 60 centimeters that weighed 68 kilograms“. It’s yield was 10 tons up to one kiloton. 300 SADMs—note the pronunciation is like Saddam— were assembled and remained in the US arsenal until 1989.” Note the very small yield of only 10 tons of TNT.

“Early known versions could destroy a two block area, with an estimated yield comparable to approximately 10 tons of TNT.” Here is the W54 portrayed as a Backpack Nuke: 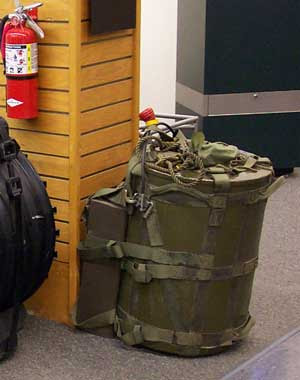 Note that the Wiki article actually compares the W54 nuke with the OKC bomb(s)! “…the smallest yield version of the W54 (10 tons) is two to four times as powerful as the 1995 Oklahoma City bombing…” Now why does Wikipedia (CIA) feel the need to try to prove that the W54 mini-nuke was too small to have perpetrated the OKC bombing? They doth protest too much, methinks. And if Wiki is doing comparisons—WHY NOT THEN COMPARE THE W54 TO THE MUCH LARGER WTC DESTRUCTION?

For completeness sake, I cite the PTB’ beloved 33 used as a nuke. See here-- http://en.wikipedia.org/wiki/W33_(nuclear_weapon) and here-- http://www.economicexpert.com/a/Nuclear:artillery.htm. Officially again, “Only one type of artillery round other than the W-48 was produced in large numbers, the W-33 for use in a 203 mm shell. Around 2,000 warheads of this type were manufactured from 1957-65, each 940 mm long and weighing around 109 kg. They were fitted in the T-317 AFAP and fired from a specialised howitzer. The warhead yield was greater than the W-48 and it was made in four types, three yielding 5 to 10 kt and one 40 kt.” But this W33 nuke has too large a yield to have been employed on 9/11.

One wonders what happened to all these nukes? My previous articles here-- wtcdemolition.blogspot.com -- detailed how such mini- or micro-nukes were used in the basement, and at various points in the towers before, during, and possibly after tower (and other WTC building) “collapses.” Such nukes as the W54, and more secret smaller ones readily fit the forensic destruction evidence, and the aftermath.

And for those who lie and still say that destruction of the towers was too quiet to have been done via nukes, I repeat the following eye- and ear-witness testimony from one of my articles. http://covertoperations.blogspot.com/2007/11/eyewitness-testimony-of-firefighters.html During the commencement of WTC2 destruction, FDNY Lt. Robert Larocco stated: “The next second I heard that loudest noise in the world that I was describing before getting louder and louder.” (snip) “It was the loudest noise I've ever heard in my life. It was in both ears. Kind of like those rockets that they launch the space shuttles with, it was like I had one going off in each ear. When I thought it was the loudest noise I ever heard, every second it was just increasing getting louder and louder and louder.”

The other things that singular article of mine contains includes: Fire Dept. eyewitnesses seeing pulverized ash before “collapse” (from the early sub-basement nuke most likely), evidence of EMP (from nukes) during “collapse”, several firemen thinking that the great heat impinging on them— far from any fire— meant they were being nuked, and even seeing evidence that people were pushed out of the towers, and did not jump, and seismic events far larger than the regime officially released.

Finally, the above-cited articles officially proclaim that “In 1991 the US unilaterally withdrew its nuclear artillery shells from service [but maybe not from internal service?], and Russia responded in kind in 1992. The US removed around 1,300 nuclear shells from Europe.”

So thousands of small nukes were removed from “official” service in the decade before 9/11/2001. Is there any proof that they were all actually completely destroyed? Including the ones that could destroy only a “2 block area.” This also begs the question about the likely existence of more secret, smaller nuclear devices. Since a Gov’t scientist has admitted they experimented with nukes down to a yield of only several pounds of TNT (http://www.house.gov/jec/hearings/dualuse/leitner.htm), it is easy to see how all this demonstrates the existence of micro-nukes. And subsequently all the forensic evidence indicates the WTC was destroyed by small nuclear devices (likely with subsidiary conventional explosives to prevent “blow through”), as demonstrated here-- wtcdemolition.blogspot.com. And further, the evidence indicates that the China Syndrome resulted because of this. See here-- wtc-chinasyndrome.blogspot.com.