Fire in the C Ring But Not in the D Ring? 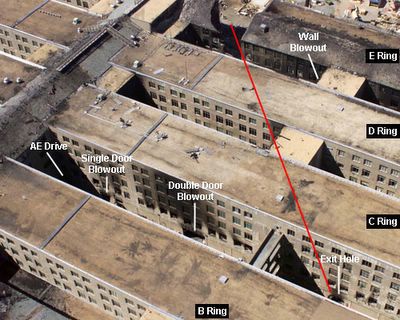 Fire on the C ring but not on the D ring?

Gosh, I never noticed this before but it just jumped out at me now for some reason.

Look at the extensive evidence of fire on the C ring-- particularly where the "double doors" are blown out. Why isn't there corresponding fire on the D ring? The D ring should have been impacted more heavily than the C ring by the plane. This makes no sense for a plane hit, but does support the idea that explosives were used to bomb the C ring. Also, note how far off the fire was from the supposed path of the plane (indicated by the red line).

A few posts ago I went over why Barbara Honegger thinks the Pentagon was bombed instead of hit by a plane. This is the first photographic evidence I've found that strongly supports that idea.

Your blog is great! It's hard to find blogs with good content and people talking about dna testing these days! I have a secret dna testing blog if you want to come check it out

Hey I was just blog surfing amd I found your blog! Looks Great!

You should check it out if you get a chance!!

A year and a half later a real comment! Oh boy where to start... Yes, the first and second floors are covered, something many seem to miss. We're looking at the tops of the fifth and third floors here, and as far as I know the plane was ONLY on the first floor. It's not surprising no smoke is visible from above. As for the A-E drive, inside of C ring, the fire on the ground floor was widespread through all rings (on the inside, not on the roof) and smoke came out through any door or window that was open. No need for them to be "blown open." They could well have just been opened to let smoke and injured escape.
In short, the government story of a plane fits the evidence, though this still does not rule out by any means an inside job or at best alowance. Check out My post on the subject for more details: http://frustratingfraud.blogspot.com/2006/12/physical-evidence-masterlist.html