Best Proof of the Apollo Hoax?

No blast crater under the LEM: 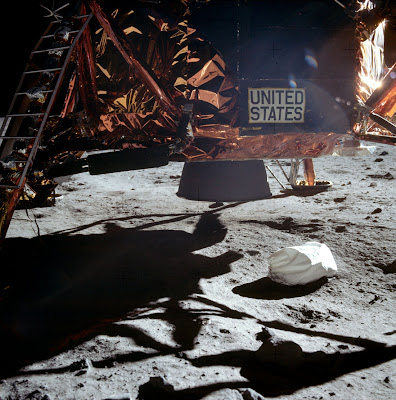 As can be seen in the photo above, the area directly under what is supposed to be the nozzle of the descent stage engine is completely undisturbed. Not only is there no crater, there is no sign of scorching and none of the small ‘Moon rocks’ and not a speck of ‘lunar soil’ has been displaced! ...Given the manner in which the modules allegedly landed, the problem here is that – unless the landing surface was paved with, say, concrete – an inordinate amount of material should have been displaced by the force of the rocket blast as the module was setting down.

To be perfectly fair, there is a hint of a crater here, though it is acentric, and not lined up with the rocket engine. But certainly there is no hint of scorching or signs of debris being blown aside. Clearly a ridiculous scene, in terms of the official story.

Well, try to find some crater under a V-STOL Harrier fighter plane after a vertical landing on a beach or meadow... you will find none. And take into account that an EMPTY Harrier weights more or less 12.000 lbs, against the 2.500 of the full loaded LEM in moon´s gravity. At the landing, the thrust of the descent engine was just a 25% of the full thrust, and the engine stops 10 feet over the surface. Sorry, no crater: it was just impossible.