Does This Like the Crash of a Plane That Was Shot Down? 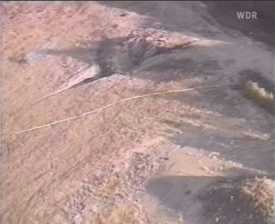 One of the "milder" 9/11 conspiracy theories is that flight 93 was really shot down and that the government is lying about it.

Please give me your opinion: does this look like the crash of a plane that was shot down? Or does it look more like some sort of faked plane crash?

The long skinny marks going left to right are apparently where the wings went into the ground.

If this was shot down, how was it shot down to create this overall crash pattern?